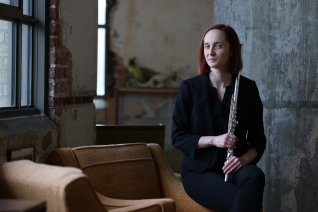 A versatile and musical flutist, Kelly Herrmann is as comfortable performing in an intimate chamber setting as in a packed concert hall.

Kelly has performed with the Memphis Symphony, Opera Memphis, Arkansas Symphony, Midland-Odesssa Symphony and Chorale, Orquesta Filarmónica de Boca del Río (Mexico), The Orchestra Now (TŌN), and Orchestra of the Americas. She has enjoyed a truly international career, performing in Eastern Europe and Scandinavia on Orchestra of the Americas' Nordic-Baltic Legacy Tour. As a member of the National Youth Orchestra of Canada, Kelly toured extensively throughout Canada and the United States and was selected to travel with the NYOC to Bangalore, India, to serve as a musical mentor for their Canada-India Youth Orchestra project. She also performed with the Bard College Conservatory Orchestra on their groundbreaking tour of Cuba in 2016 and toured China as the principal flutist of the Vermont Youth Orchestra. 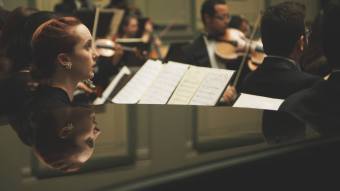 An active solo artist and chamber musician, Kelly performs regularly with Luna Nova Music, Memphis' professional chamber music collective. She was awarded 1st prize (senior wind division) at the 2017 Young Artist Competition of the Memphis Beethoven Club and was a winner of the 2017 University of Memphis concerto competition. With Memphis-based woodwind trio Crosstown Winds, she has made numerous recital appearances and participated in educational workshops for middle and high school musicians. Crosstown Winds was awarded third prize in the senior division at the 2018 Coltman Chamber Music Competition, held annually at the Butler School of Music at UT Austin. 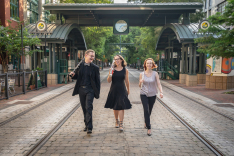 Kelly was a 2019 cohort member of the Global Leaders Program, a nine-month Executive Graduate Certificate program in Social Entrepreneurship, Cultural Agency, Teaching Artistry, Civic Leadership, and Organizational Management. The cohort undertook a series of online seminars led by professors from Harvard, Duke, and the Juilliard School, among others, and leaders from organizations such as El Sistema USA and the League of American Orchestras. With the GLP cohort, Kelly also participated in a two-week long residency in Chile for further training in using music to enact social change. 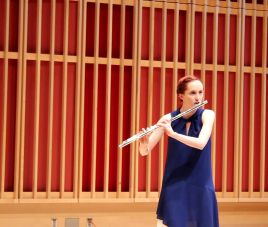 Kelly has performed in masterclasses for Sir James Galway, Jeanne Baxtresser, and Jeffrey Khaner. She earned her bachelor's degree in flute performance from McGill University and completed a performance certificate at the Bard College Conservatory of Music, studying with Tara Helen O'Connor. She recently finished her master's degree in flute performance at the University of Memphis Scheidt School of Music, where she served as the sole graduate assistant in the flute studio of Elise Blatchford.

In addition to her performance pursuits, Kelly serves as an adjunct instructor of music appreciation at the University of Tennessee at Martin’s Somerville Center and as an in-schools teaching artist with PRIZM Ensemble, the only El Sistema affiliated program in the mid-south. She maintains an active private studio.